The title of my book isn’t working, but I’m stumped a little on what will work. I know it’s important. I want it to grab the potential reader, give them some idea of what they’re getting, but not give away too much. So, it needs to be short and catchy. 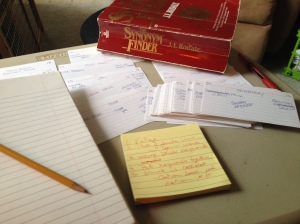 I’ve heard it called the “business card” of the book, and that’s probably true. I know I’ve picked up thousands of books in libraries and bookstores over the years, and now, click on books on Amazon just because I like the title.

One writer’s blog suggests write some keywords from the book and action verbs on small pieces of paper, and draw them out of a hat to come up with great combinations. Another suggests making a list of twenty titles from books you like in the genre you’re writing, brainstorm using important words from your book and come up with similar titles to try to find a combination you like, and then see if it would fit in the list of the twenty book titles you found without being to similar. I’m working on that.

The book is tentatively titled “Arkansas 309,” which is the name of a state prison program involved in this mystery. It’s too restrictive and may not attract readers outside this area. It’s a mystery that involves a female protagonist who is a newspaper reporter with family and career problems, who’s investigating a story of police corruption and simultaneously writing about a serial killer. And, of course you’ll understand if you know me, she grew up in a cemetery.

My husband thinks I need to worry less, call it simply “309” and go on. I’m not sure. Any suggestions out there? Please?

12 thoughts on “Any Help With a Book Title?”