Good writers choose their words carefully. This blog offers a different type of book review by combining it with vocabulary building. Included here are a few interesting words I found in Intrusion, a book released in July by British author Mary McCluskey. Some of the words McCluskey used were British and unfamiliar to me, so I included them in this blog.

Intrusion pits a woman who has hit rock bottom against a long-lost best friend with a hidden motive. Mary McCluskey deftly pulls the reader into the emotional turmoil of Kat Hamilton’s shattered life. The mourning mom struggles to support her husband’s efforts to maintain his standing in his law firm and fights to find meaning in her own life, but can barely get through each day. When she’s at her lowest, evil steps in to help push her over the edge. I found Intrusion to be an exciting psychological thriller that kept the tension high while ever increasing the stakes all the way to an end with a unexpected twist. McCluskey knows how to keep the reader guessing. 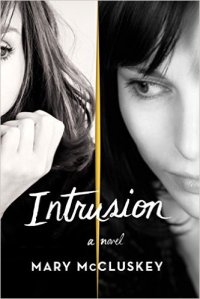 Cabochon: A gem polished but not faceted. <Origin> mid-16th century: from French, diminutive of caboche ‘head’. “Sara gave a small smile and looked down, twisting the cabochon emerald ring off her finger, then holding it for a few seconds, as if checking its weight, before replacing it.”

Sepia: A reddish-brown color associated particularly with monochrome photographs of the 19th and early 20th centuries. <Special Usage> a brown pigment prepared from a black fluid secreted by cuttlefish, used in monochrome drawing and in watercolors. “These memories dropped softly, completely intact, into her mind. Sometimes, they were in strong, primary colors, occasionally in a kind of sepia, like old movies.”

Intransigent: Unwilling or refusing to change one’s views or to agree about something. “He is a lawyer. He has the nitpicky legal mind. I never dreamt he would be so intransigent.”

Janus: An ancient Italian deity, guardian of doorways and gates and protector of the state in time of war. He is usually represented with two faces, so that he looks both forward and backward. <Special Usage> two-faced; hypocritical; two-sided. “In profile, the two sides of her face could look quite different: one side so bare, the delicate bone structure clear and unobstructed, the other side hidden by a cascade of rich brown hair. A Janus face, Maggie had said once.”

Sussed: (Chiefly British, informal) A verb meaning to realize, grasp. An abbreviation of suspect or suspicion. “Though Sister Judy may have sussed me.”

Gobsmacked: (Chiefly British, informal) Utterly astonished; astounded. <Origin> 1980s: from GOB + SMACK, with reference to being shocked by a blow to the mouth, or to clapping a hand to one’s mouth in astonishment. “They’ll all be gobsmacked.”

Definitions are from The New Oxford American Dictionary through Kindle.

“The word is only a representation of the meaning; even at its best, writing almost always falls short of full meaning. Given that, why in God’s name would you want to make things worse by choosing a word which is only cousin to the one you really wanted to use?” ― Stephen King